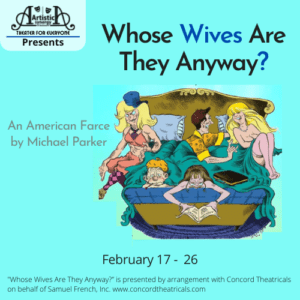 The Ashley Maureen Cosmetics Company has been sold and two of its vice presidents, David McGrachen and John Baker, have planned a weekend off before the new C.E.O. arrives on Monday. With their wives safely off on a shopping spree in New York City, they check into The Oakfield Golf and Country Club intending to “golf their brains out.”

They unexpectedly encounter their new boss, Ms. Hutchison, and she insists on meeting the wives, commenting blithely “no one who went golfing for a weekend without his wife would ever work for me.” So … David and John have to produce wives. John persuades Tina, the hotel’s sexy receptionist, to play the role of his wife, but the only one who can pretend to be David’s wife is…JOHN!

Inevitably everything goes wrong as John moves in and out of bedrooms, changing from male to female at a frantic pace. Hilarious chaos ensues when the hotel phone system goes on the blink, Tina has too much champagne and can’t keep her clothes on, and, yes, the real wives arrive!

Whose Wives Are They Anyway is presented by arrangement with Concord Theatricals on behalf of Samuel French, Inc. www.concordtheatricals.com 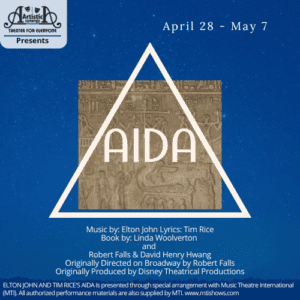 At the Nile’s edge, the enslaved Nubian princess, Aida becomes romantically entangled with the Egyptian captain, Radames, who is betrothed to the Pharaoh’s daughter, Amneris. As their forbidden love grows deeper, Aida is forced to find balance between her heart’s yearning for Radames, and her responsibility to lead her people.

Based on the opera by Giuseppe Verdi, Elton John and Tim Rice’s Aida is a timeless love story, featuring an award-winning pop/rock score from the seasoned pop duo who brought musical life to Disney’s The Lion King. Rousing rock numbers and heart-wrenching ballads bring the ill-fated lovers into a new era.

Artistic Synergy of Baltimore is a 501c nonprofit organization. If you are interested in making a tax-deductible donation to our theater, you can send  donation via PayPal at: paypal.me/asobaltimore or please contact us at ArtisticSynergyBaltimore@gmail.com for other options.